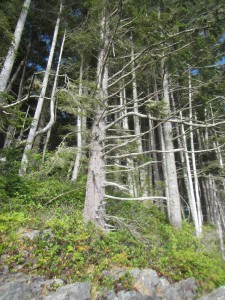 Irwin Park, a pristine area located between Sooke Road and Highway 1, on the outskirts of Victoria (British Columbia, Canada) was once a privately owned campsite created and developed by Joe Pekter. He created two man-made lakes separated by a dam and established over a hundred campsites – it became known as Humpback Campgrounds.

In 2005 Colwood Rotary member Gerry Kalk, suggested to the club that the Humpback Campsite would be an ideal spot for an environmental clean-up project under consideration. The club supported the idea and approached the City of Langford and the Community Education Program of Sooke School District, now known as the WestShore Centre, to consider involving young adult students in the clean up. The National Literacy Secretariat of the Federal Government was approached to provide funding for a four-way partnership with the City of Langford, Colwood Rotary, the WestShore Centre for Learning and Training and the University of Victoria. The concept expanded and evolved to include other aspects.

During the school year of 2005-2006, on Thursday afternoons two University of Victoria graduate students taught the 20-25 students media skills and then Friday mornings the group headed out to the park, cleaned up brush, cut down trees, built snake fences, planted indigenous plants/trees and generally improved the site.

“It has been a wonderful project. One of the learners who had struggled with literacy for years blossomed with this project—he wanted to have a waterwheel at the park and he researched extensively on the Internet to find out how to build one. He also became a wonderful photographer as a result of the project as well as becoming an expert in editing the video on the computer. He still struggles with writing and completing assignments but he really shone with the environmental project, as did many others.”

My main role in this collaborative environmental restoration project involved teaching adult learners and managing student video production. Unfortunately the project website domain has not been renewed… so all the great work that was documented is no longer available to the public. I was also responsible for the project evaluation and report funded by the National Literacy Secretariat.